Started the day at 8:15am – set my alarm for 7:35 but accidentally hit stop not snooze – this is exactly why I still have a bedside alarm clock!!! We went to the market on the waterfront and checked out everything – clothes, shoes, duvets(???!!!), kids books, lawn mowers… all kinds of weird and wonderful! And lots of really yummy smelling food which we ignored because our next stop was Coffee Post for the VSA peeps Saturday meetup – breakfast around 10 every week.

I had the Eggs Benedict and have to say it was the best I’ve had in a very long time – and I’ve tried a few! Met up with a few of the volunteers and their offsiders and they are great – it’s such a cool group and they support each other so well. Couldn’t stay long ‘cos we’re off to pick up Marg – a Volly who is here for another month and then back home to NZ.

She’s flying to Fiji today to meet up with old friends from primary school(!!) and enjoy a girls week catching up with them. Marg is in her 50’s, high energy, funny, just lovely. Then picked up Tina who is Sally’s program manager, she makes everything right here for the volunteers as much as possible and keeps the employer focussed. Also lovely and a ChCh chick. We have weird parallels and had a fantastic conversation later on.

So we went to the airport and parked up. 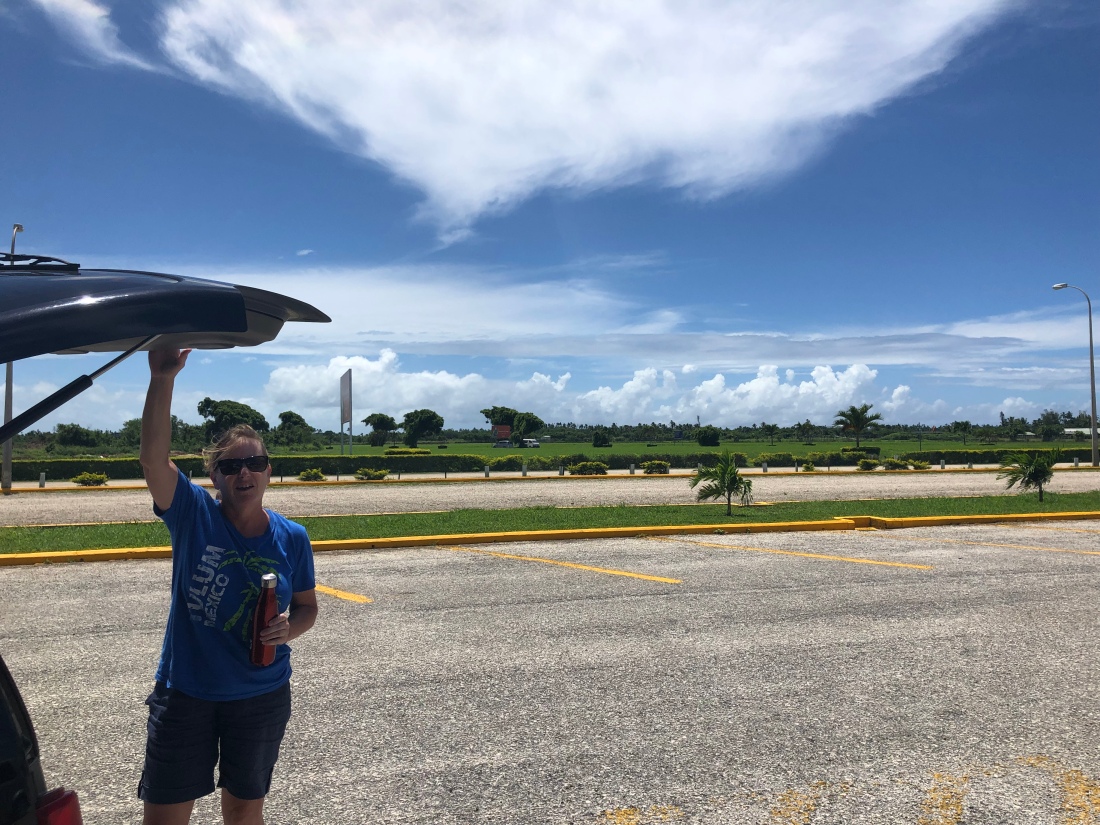 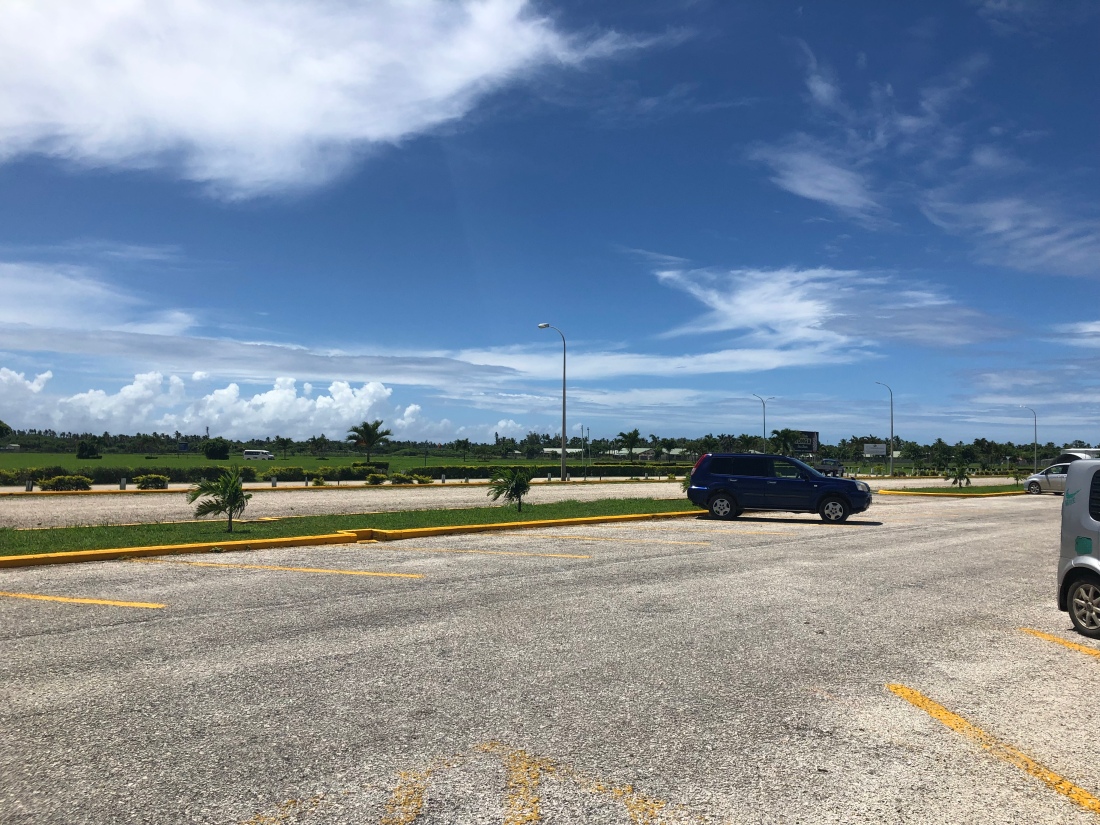 $2 to park at the airport! Tina and I needed to get cash and Sally took the opportunity to check out the public toilets in the interest of public safety so we all bundled out and said a warm goodbye to Marg. Tina had got her cash and I was approaching the ATM machine when Marg came up and said she had left her Passport at home. This is now 12pm and the latest time to check in was 12:20. Actually the distance wasn’t that great, Sally and I could have zipped back to her place and back in that time but everyone here drives at least 20k under the speed limit. Apart from the people that will actually pass and they tend to wait till it’s safe and on a long straight. Which is great – don’t get me wrong, very into the safe passing thing. It just takes a while. So, traffic is mind blowingly slow and it’s a very good thing that Sally is driving

So we hung around till Marg had booked her new tickets, she couldn’t fly out till Monday morning due to the fact that Tonga is CLOSED on Sunday. Completely closed. Nothing but churches are open on Sunday. Actually kinda like heaven except when you need to have somebody working on a Sunday. In which case it sucks big time.

So Marg’s sorted and we hit the road again – heading for the beach!!! Tina and Marg put their heads together and suggest going to Oholei Resort for cocktails and lunch and then swimming. So we drive 15 minutes down the road and reach the gates and they are closed and padlocked. Go back to the sign and they are only open 9-5 Wednesday, Friday and SUNDAY! So yeah – consistency is not Tonga’s forte.

All good! Up the top of the Eastern bit of the island is the village of Kolonga where Marg assures us there is a cafe. So we travel from south to north in a pretty well direct route on the main road to check out this cafe – Marg has great stories and Tina’s hilarious so Sally and I are enjoying ourselves muchly. Going North there is absolutely no traffic. 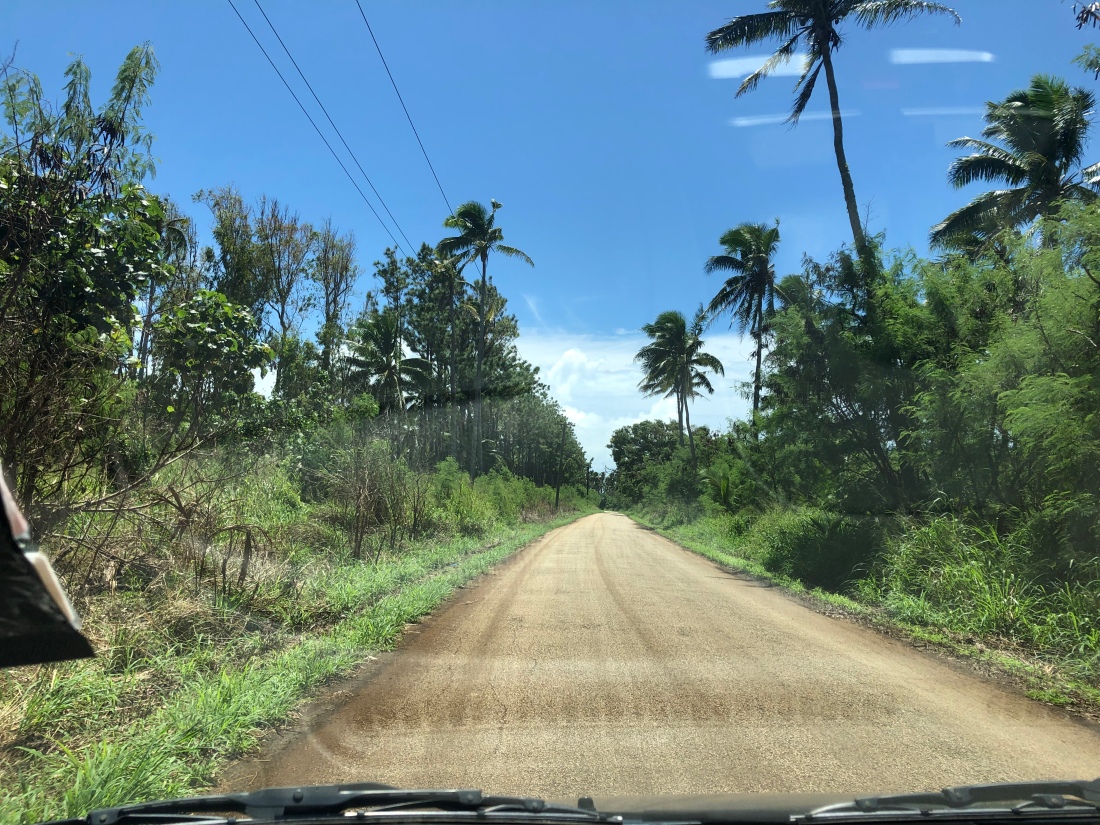 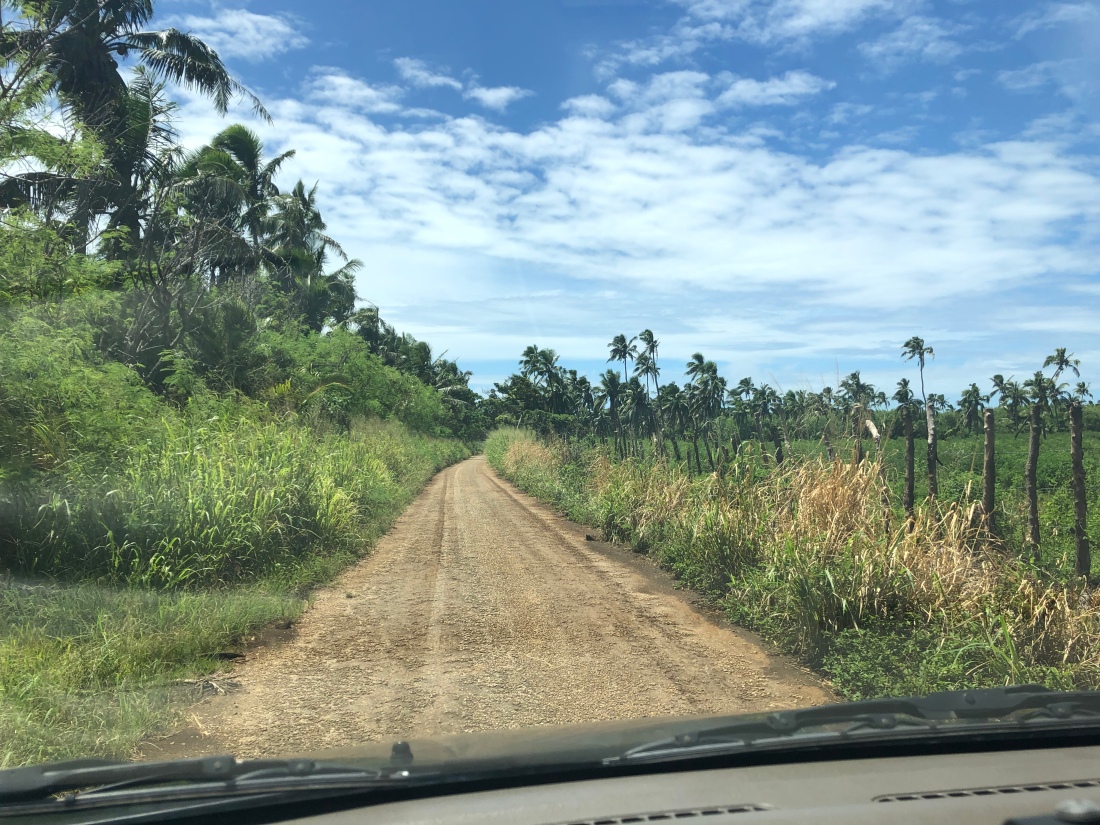 So another 19k down the road we’re back in civilisation, and then 10 minutes after that we were at the “cafe”.

Both in Tonga and Tahiti (and probably just about every island in the pacific) they have, what are called here, the Chinese shops. These are basically wooden cargo crates with windows cut out in the front, barred with a wee slot at the bottom. They’re like dairies – have your very basic stuff (like twisties and sprite) and are scattered everywhere. 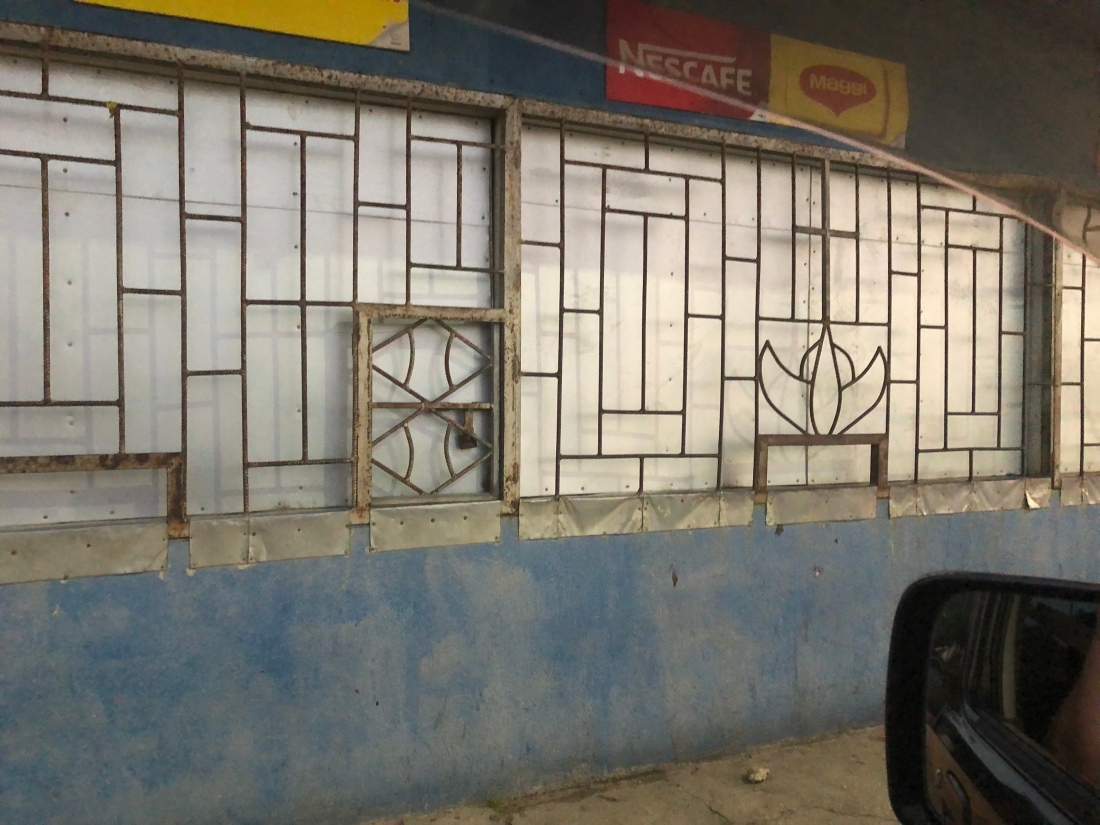 This is a fancy (and closed) Chinese shop. Most look more like a cross between prison and bank teller bars.

So this “cafe” is that, but it has an extra section that you can order from the outside menu from – as the guy kept telling us. Once we managed to make him realise we’re not senile old women and there is no menu outside and he found it under the counter he explained that the menu that should be there only has two options – raw fish and crab. So I bought a packet of twisties. Sally and Tina share a few packs of manioke (cassava) chips and a packet of Cameo Creams. There are a few picnic tables hidden behind a high wooden fence and we sit there and wait for Marg’s Ota Ika (which is like Ceviche – basically raw fish marinated in lemon juice and coconut milk and spiced anyway the chef prefers, sometimes (apparently) it can be VERY spicy). Marg sits beside me and I pretend she’s eating ice cream.

And then we’re off looking for a beach!

We trundle along checking out the (actually completely) gorgeous views and find Ha’amonga ‘a Maui (the burden of Maui) which is a Stonehenge type deal that is believed to have been built around the 13th century. Or built by Maui while he was reshaping the Pacific…. You’re welcome! (Val, Sally says ask me ) 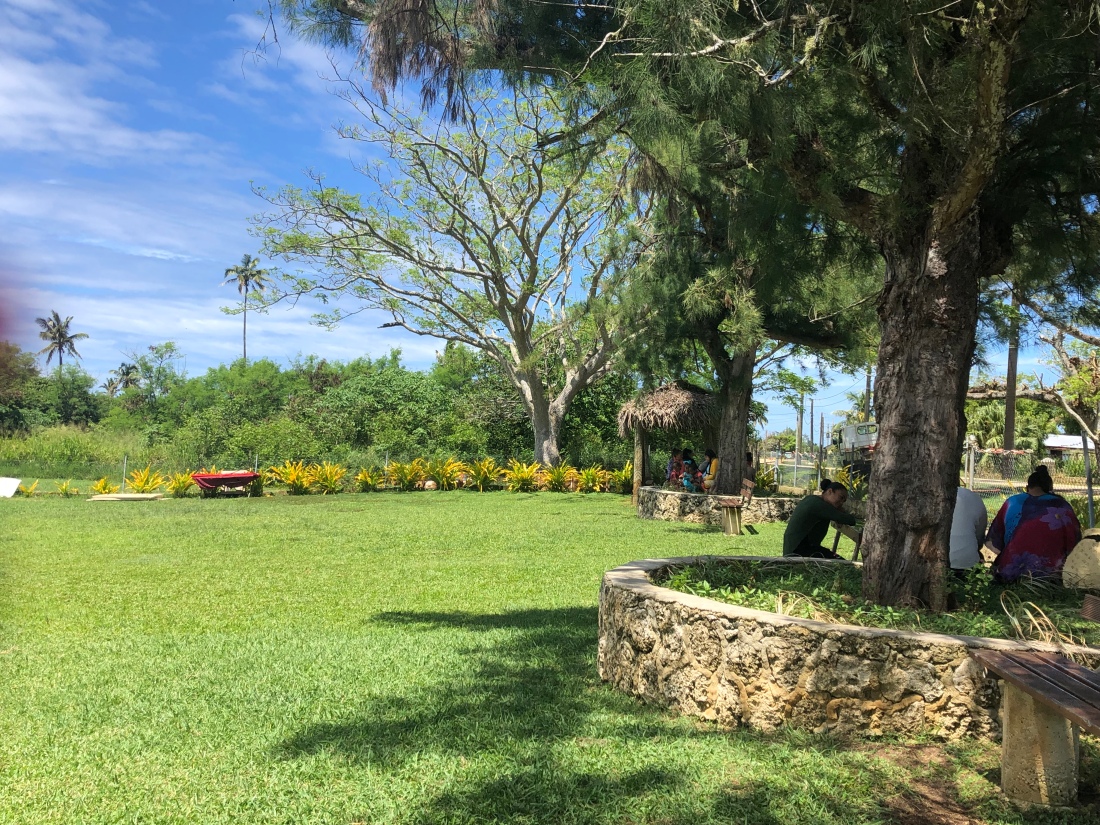 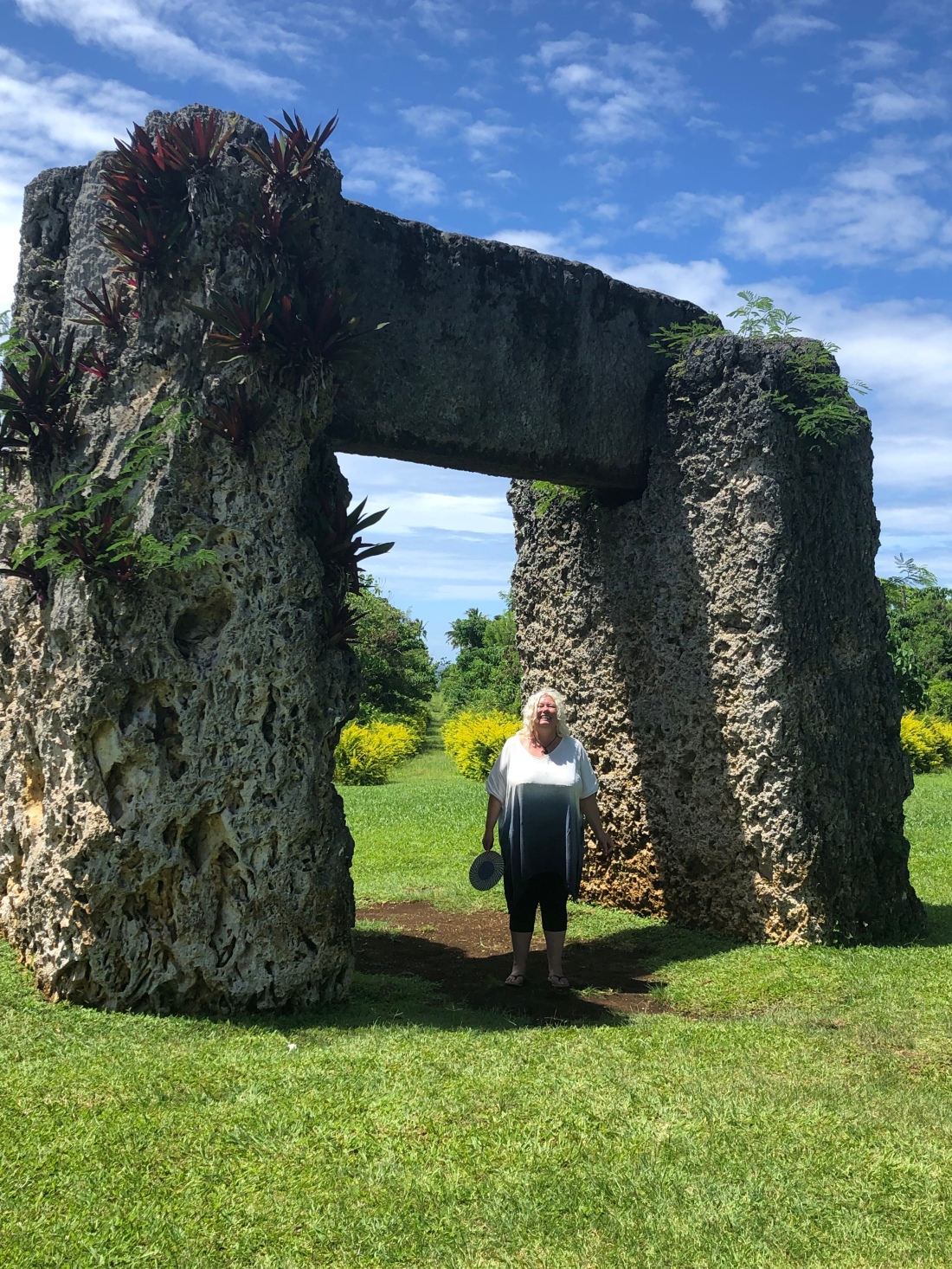 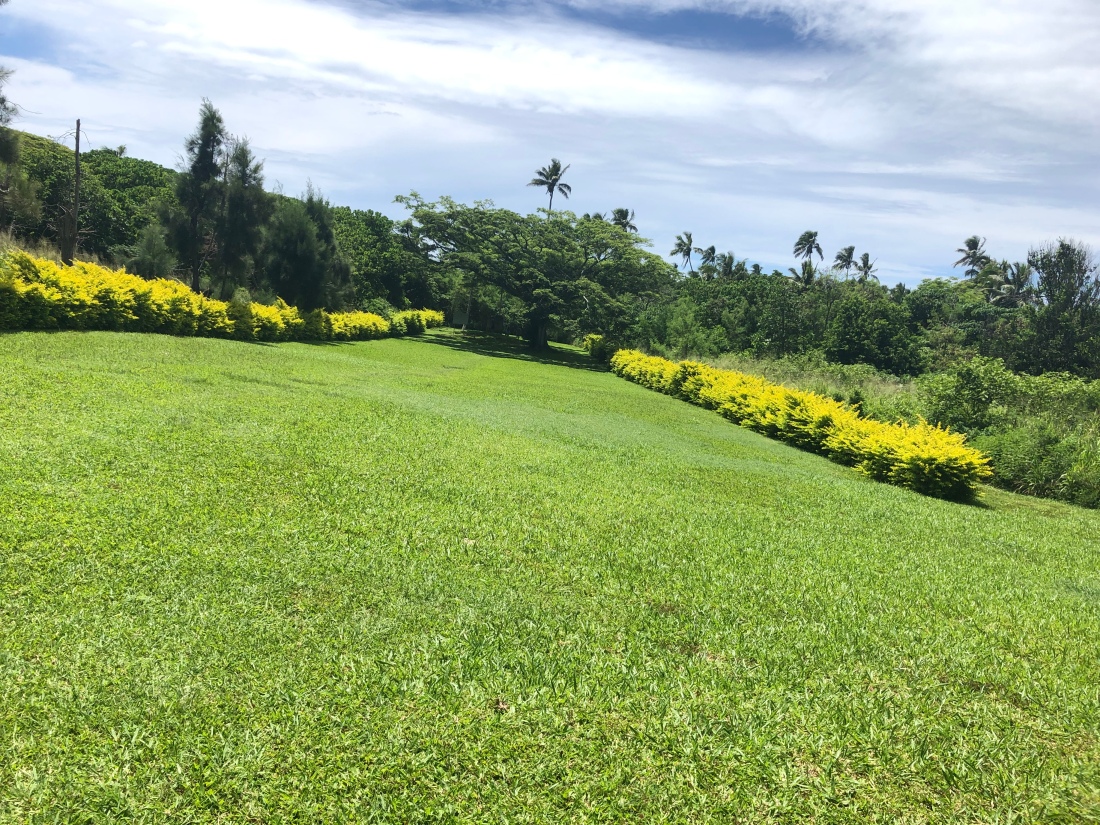 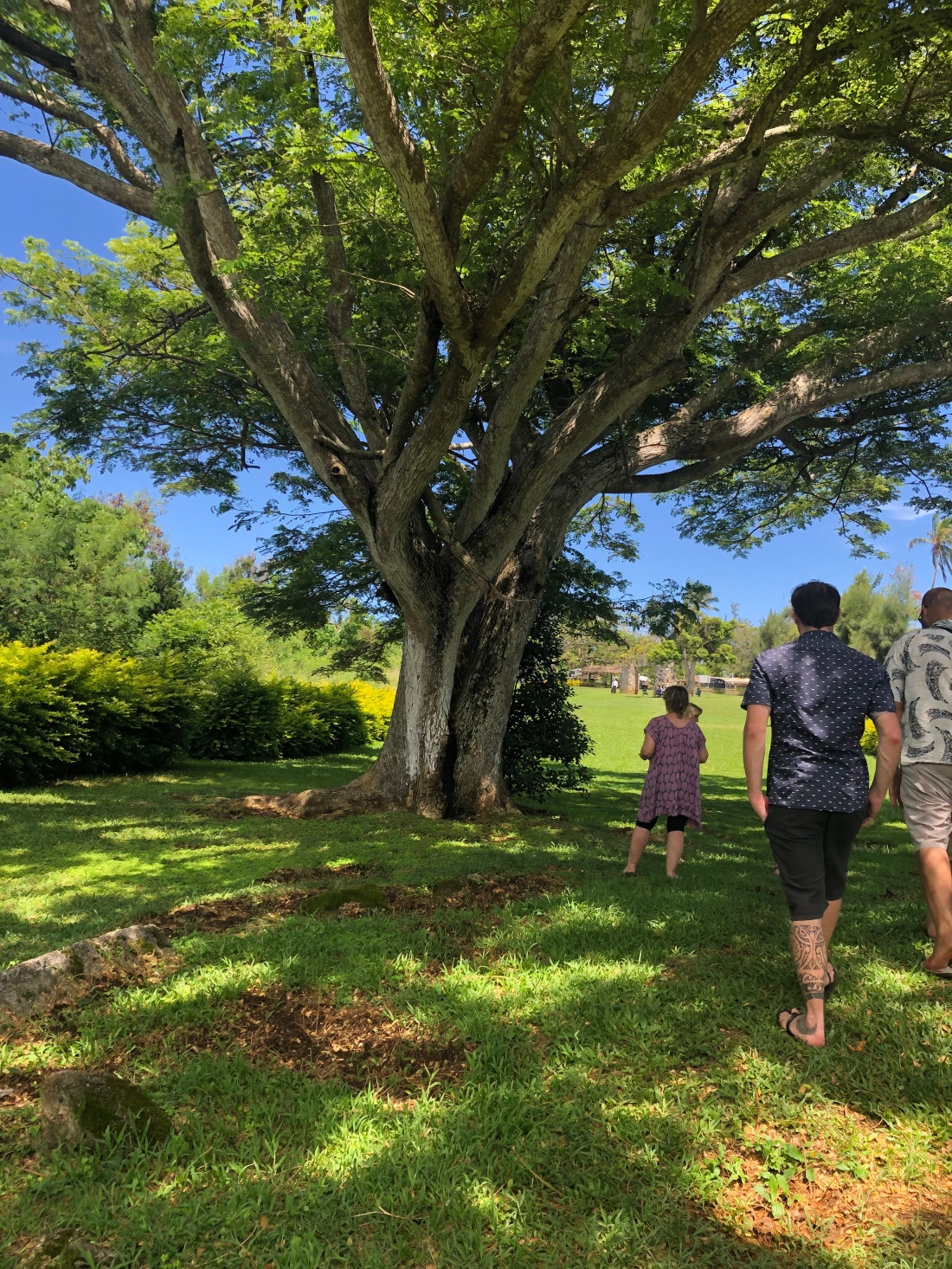 And then, finally, we find a beach. Gorgeous! Has a kids playground and a few people swimming. Must be good! 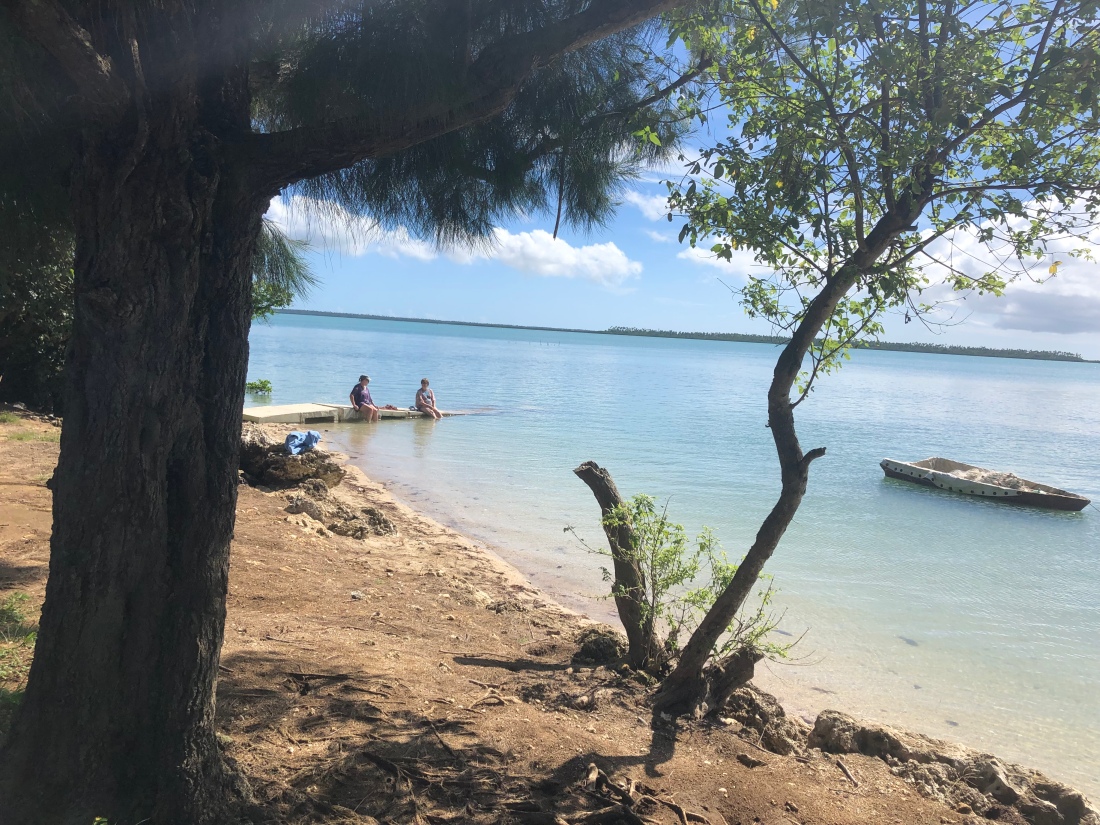 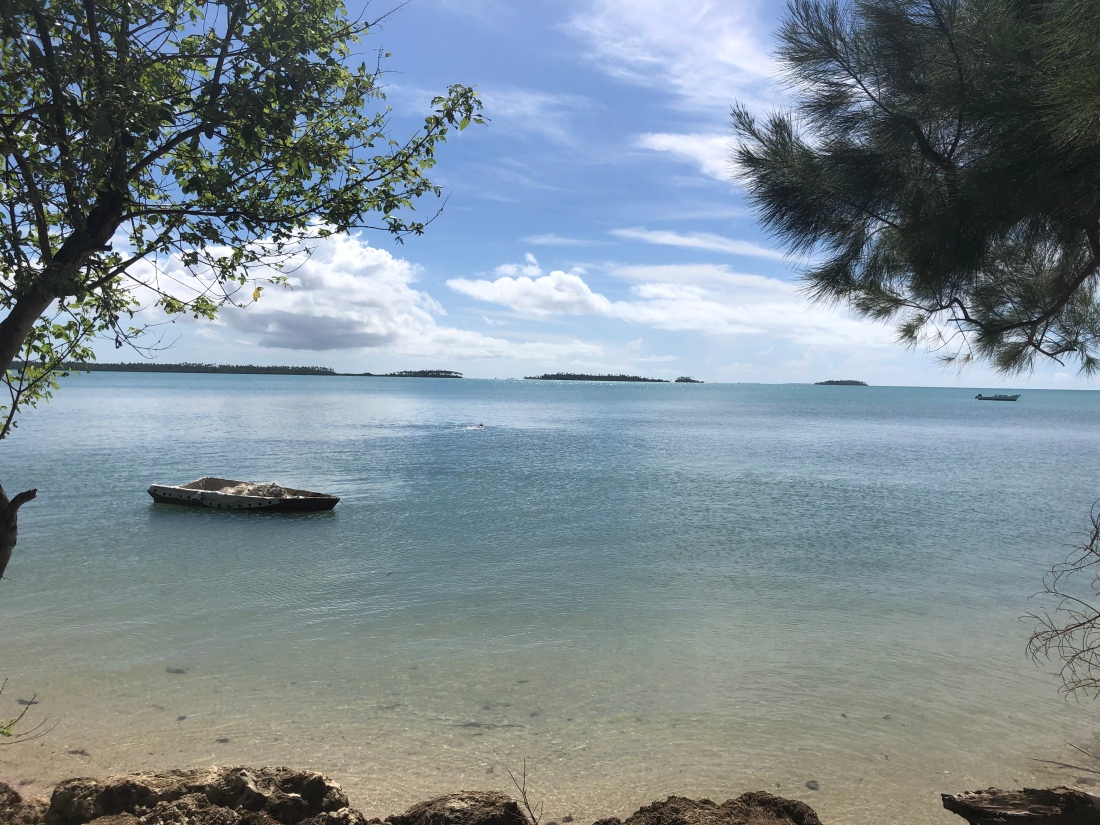 And then we realised that we can’t actually all change into our togs here. So we drove along till we ran out of road and turned the car so we could all hide behind it and slip discreetly into our swimming costumes (and cover ups). Initially we were going to swim there Palangi style (just in our togs) but there were way too many big fish for my liking (one) so we covered up and went back to the nice beach.

Turns out that had fish too! But quite a bit smaller. At least close to the shore – there are a couple of guys in a boat smacking the water with really long sticks heading towards a couple of guys on a kind of raft. We figure they were fishing but not sure what the technique was – Sally and I tried to google it later but actually men in boat with big stick is surprisingly hard to get a decent google result on.

So I went snorkelling(!!!) to look at these wee fish that kept coming up to us – practically see through but with black stripes. Gorgeous! So fun! Want to do it again!

We paddled around a bit and went back to Marg’s to get changed, them off to Seaview Lodge for Happy Hour Pina Coladas (mucho mucho strong!) where Tina and I became Cantabrian soulmates, Tina tried to use her contacts with police back home to find Marg’s step daughter’s mother who was in the mosque on Deans Ave at the wrong time and generally talked serious stuff.

Then went for pizza! Gorgeous homemade wood smoked pizza (at least I assume so from the amount of smoke and generally good smells coming from the kitchen end) and a fantastic cover band who covered all the good things women of a certain age are likely to love! 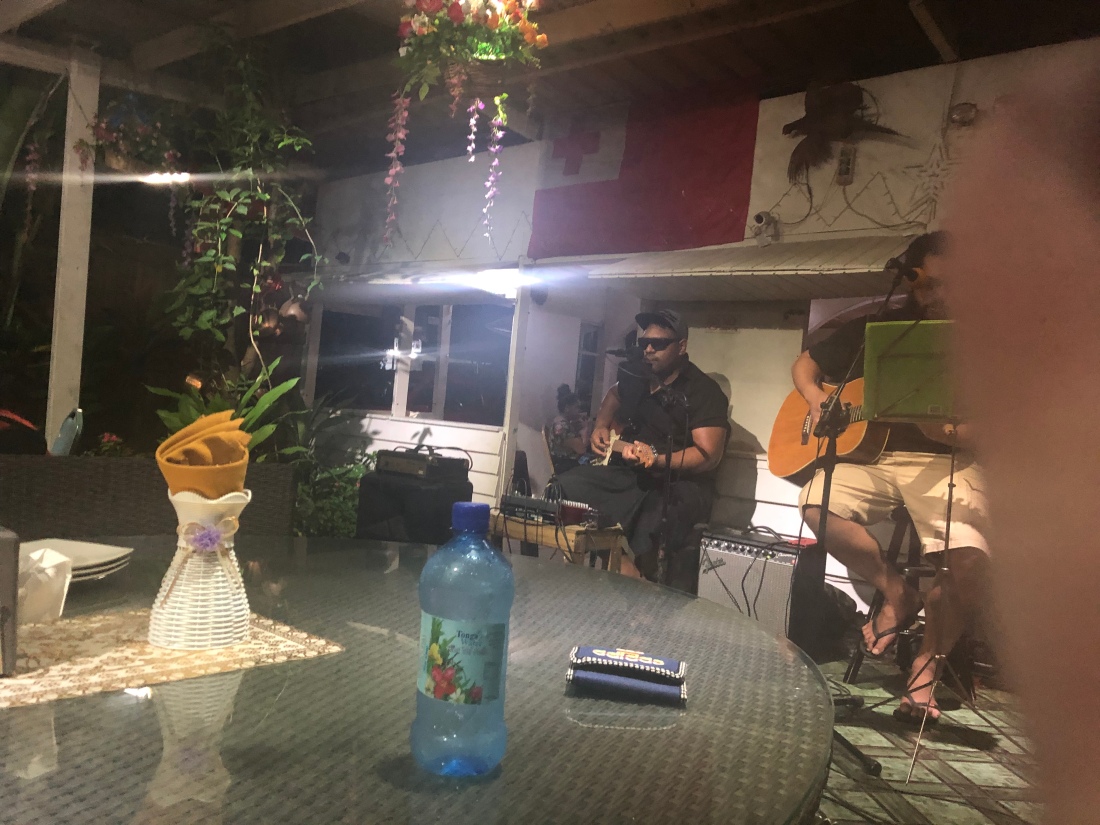 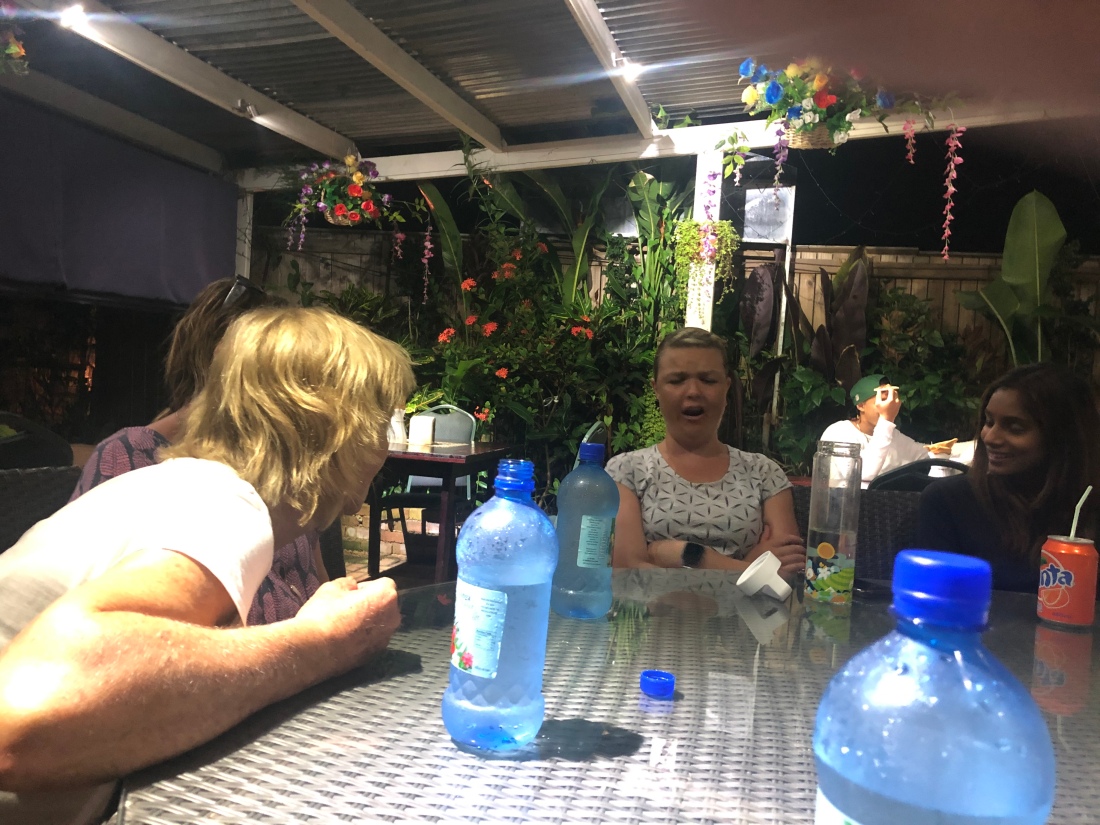 And finally dropped people home and to bed.

This site uses Akismet to reduce spam. Learn how your comment data is processed.