Skip to content
Malo e leilei!
Arrived in a downpour! Really heavy rain and very large puddles – and so warm I don’t understand why there was no fog or steam clouds…
The plane took off late from Auckland because of an hydraulic issue, so an hour and a half or so on the tarmac in the freezing air conditioning, the plane ran out of blankets! Fortunately I’d brought the scarf that Sera gave me that’s a light wool (cashmere??) wrap and it was perfect for the situation then we had a very smooth flight, got to Tonga about 9:30pm and Sally was there to meet me – phew! So frickin’ awesome to see her!
Oh – one of the first things she told me is that there is no swearing, farting or mention of farting in this country. The second and third things make absolute sense – but that first thing is definitely going to be a huge challenge for me! And unfortunately I’m a bad influence – she was looking like someone was about to shoot her when she swore in the first minute of being with me then explained that ‘rule’. The next two were explained in the privacy of the car 😀
There is also a very strong dress code in Tonga – for men and woman – and you need a certain standard of dress in certain places. Which is interesting… and a bit of a challenge!
Am thinking this isn’t going to be my island paradise… but it is beautiful! Very much cyclone hit and there are many many battered and empty buildings, but it is very like Tahiti, all the coconut/banana/paw paw trees, the houses and living conditions are very similar except Tonga doesn’t have the expensive tourist section. And their supermarkets are definitely funkier! Lots of dogs! I’ve seen two cats so double the Tahiti number already, and while there are heaps of chickens about the roosters appear to live elsewhere, which I’m really grateful for! And the chickens are mostly out of town which probably explains the roosters being quiet.
Didn’t see much of Tonga on the way from the airport due to the fact there are no street lights and it was sheeting down – she drove like a pro! Sally hired the car that afternoon and was driving in Tonga for the first time since she’s been here. Awesome!
Every time we turned a corner it was like someone turned a tap on above my left shoulder – I kept gasping which worried Sally for a bit, but we decided it was hilarious!
Got to hers and caught up till going to bed at 3am. Then she was up at some ungodly hour to get to work!
I stayed in bed till nearly 12 today (wonderful!!) when Sally came home and offered me a cuppa 😃 And we lazed about, Sally unpacked her suitcase and we took shots of her haul from home – that was really cool! Have a photo of her taking a photo of that which makes me laugh. 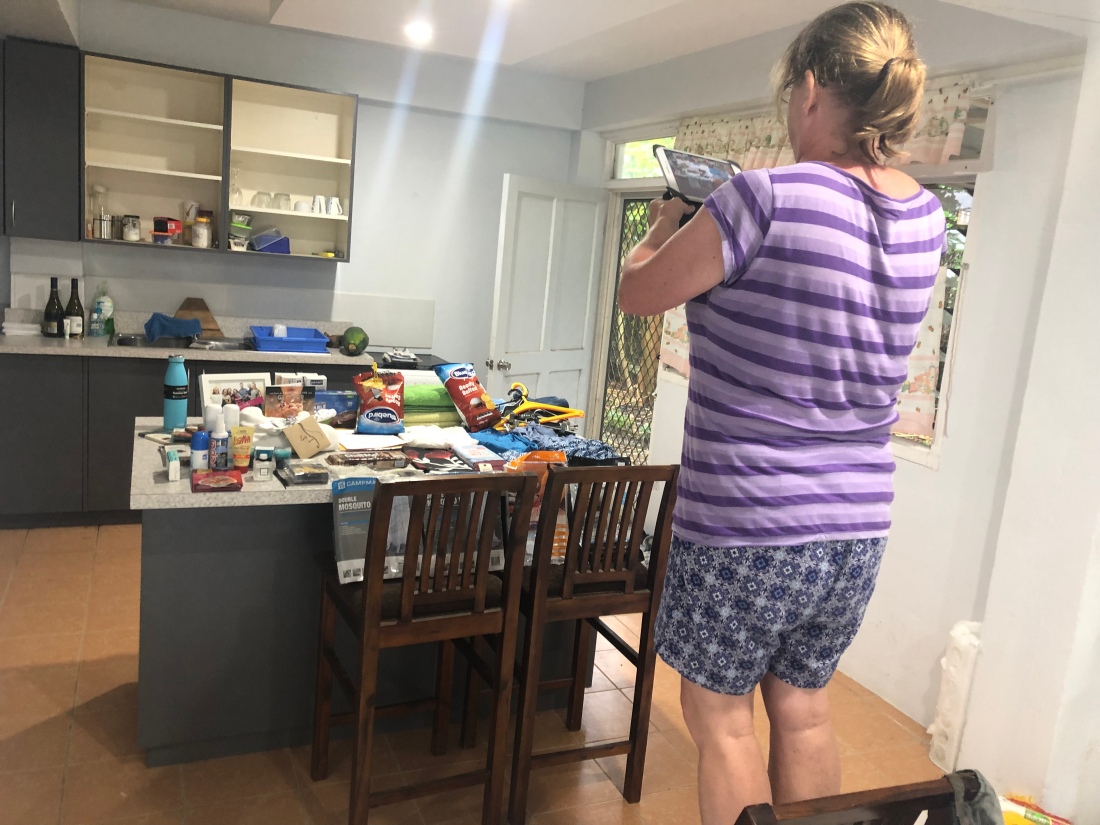 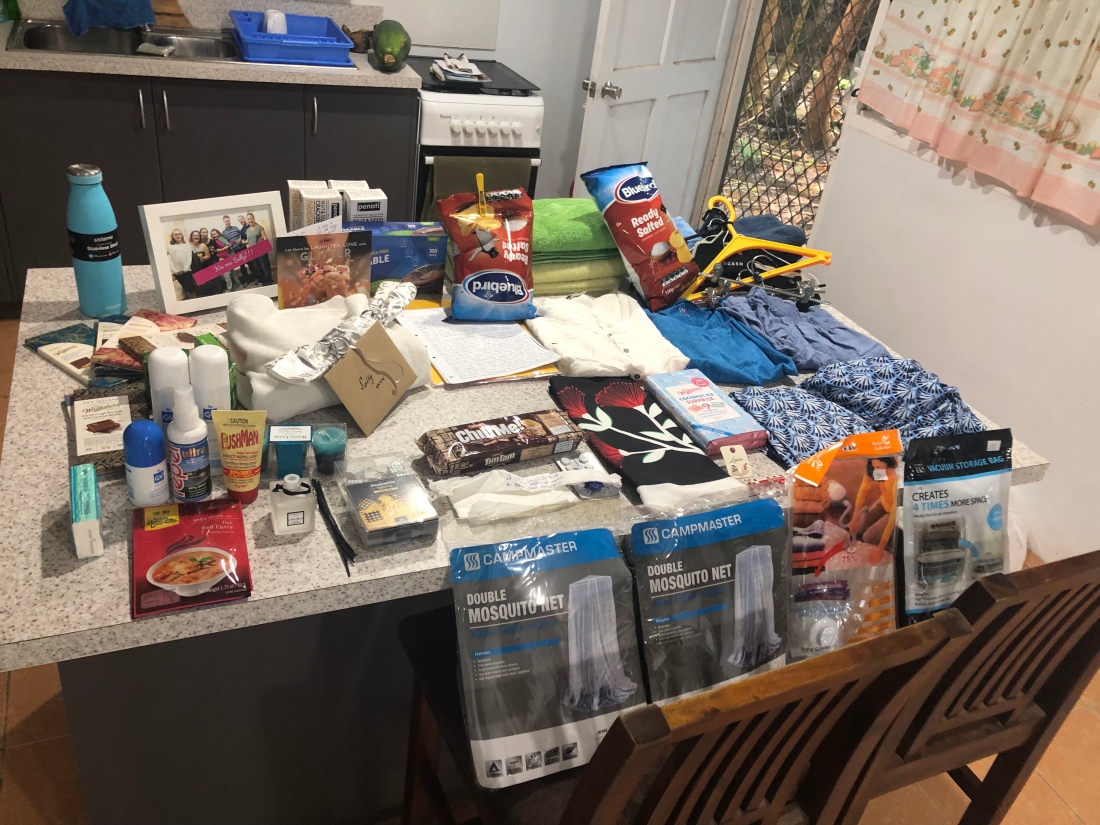 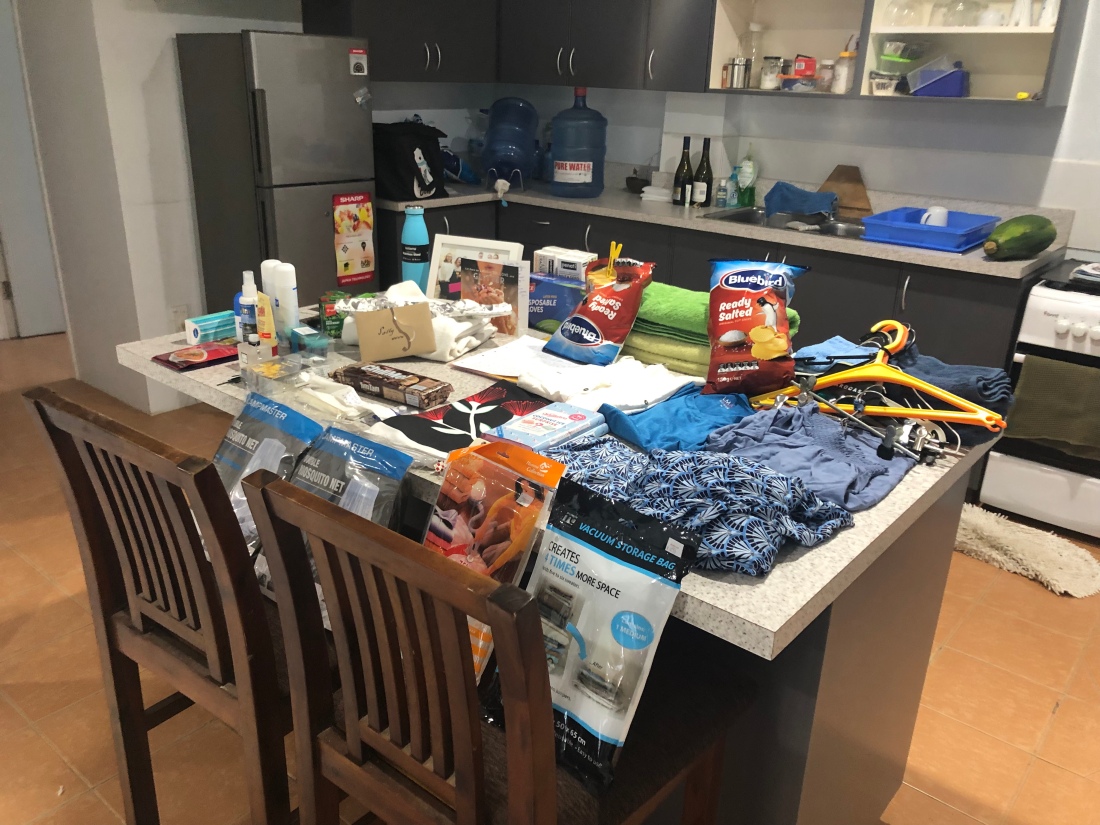 She told me she’d got in the car this morning and got drenched! The passenger side was a swimming pool and she got covered in water as soon as she got in – was actually drier outside! So she took the wee yellow car back to FAB rentals and they gave her an upgrade which was awesome – nice boxy wee thing that suited us beautifully. And we found out later that the wee yellow car and the vollies have a history… Vicky and Jasmine (name check Sally??) had also hired this car and had been joining along the highway (top speed limit 70km) and the bonnet flew back on to the wind screen and caused a bit of damage to the windscreen. I’d say we were lucky with our leaks 😁

About 3pm the rain had calmed down and we went for a tiki tour, went past the King’s palace – which is about 8km from the King’s residence(!!) – and the King’s tombs and down past the port where Sally works and past where the good road ended, then turned round and went the other way and got lost 😁
She’d told me there are 3 tourist attractions in Tonga: the blowhole, Tsunami rock and the three headed coconut. And of the three we should give the three headed coconut a miss as really it’s just a coconut palm with two branches off the main trunk and you can only see the small one at the right angle.
So we’re driving around trying to figure out where we are using a tourist map with heaps of adverts and very little detail (Google maps had NO idea where we were) when we stumbled across the three headed coconut!!
*SPOILER ALERT*
We went past the three headed coconut about 27 times on my five day adventure!
Oh – and the reason it’s a tourist site is it’s (apparently) the only coconut palm in the world with branches!! Very bad pics attached for your perusal 😁 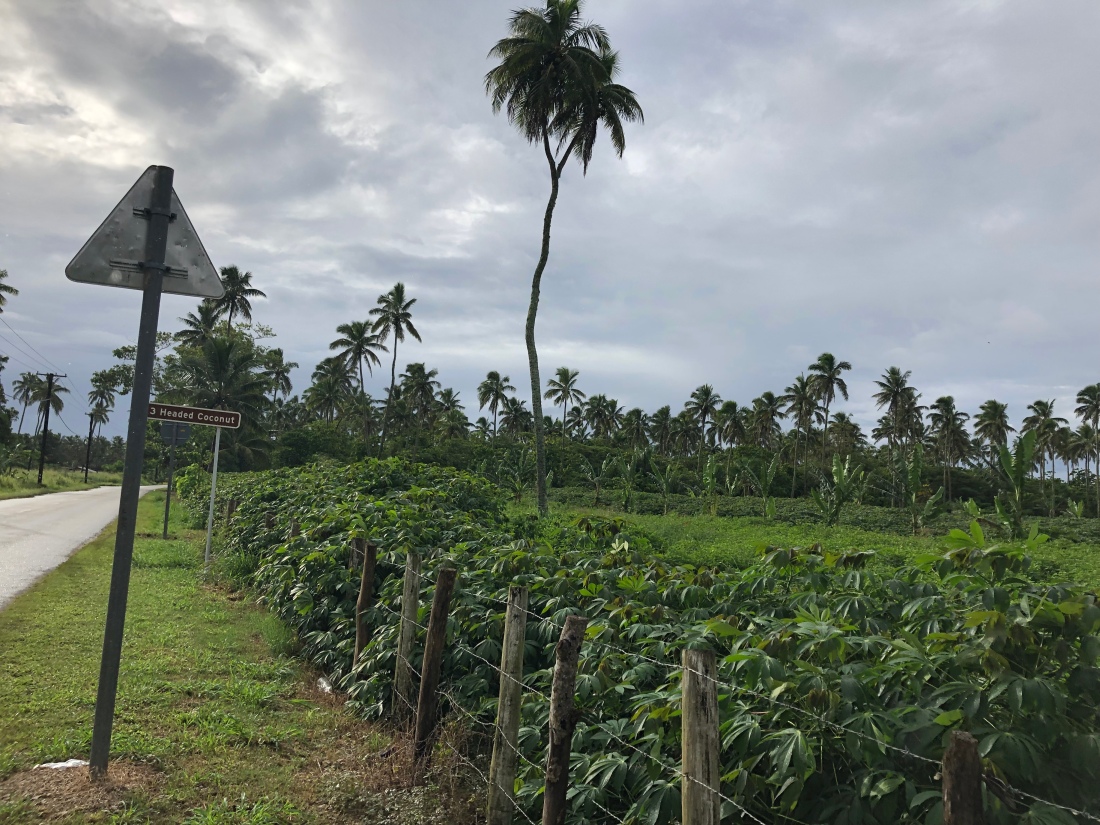 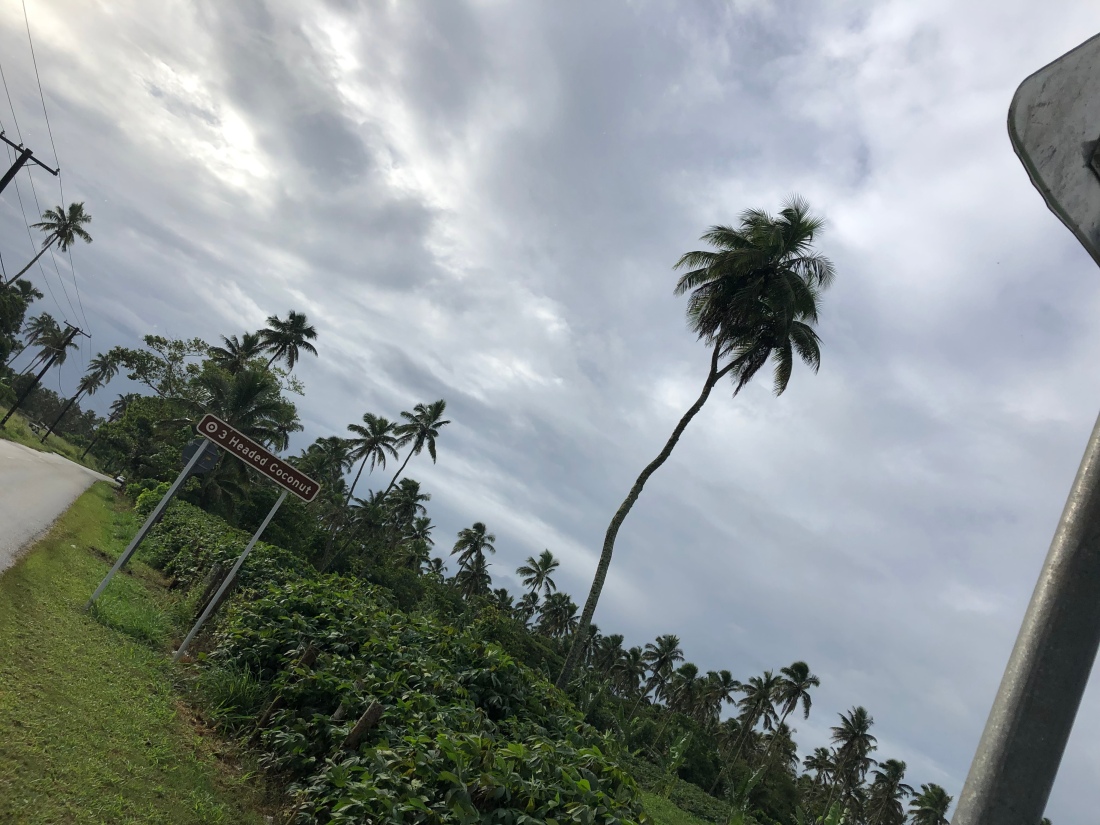 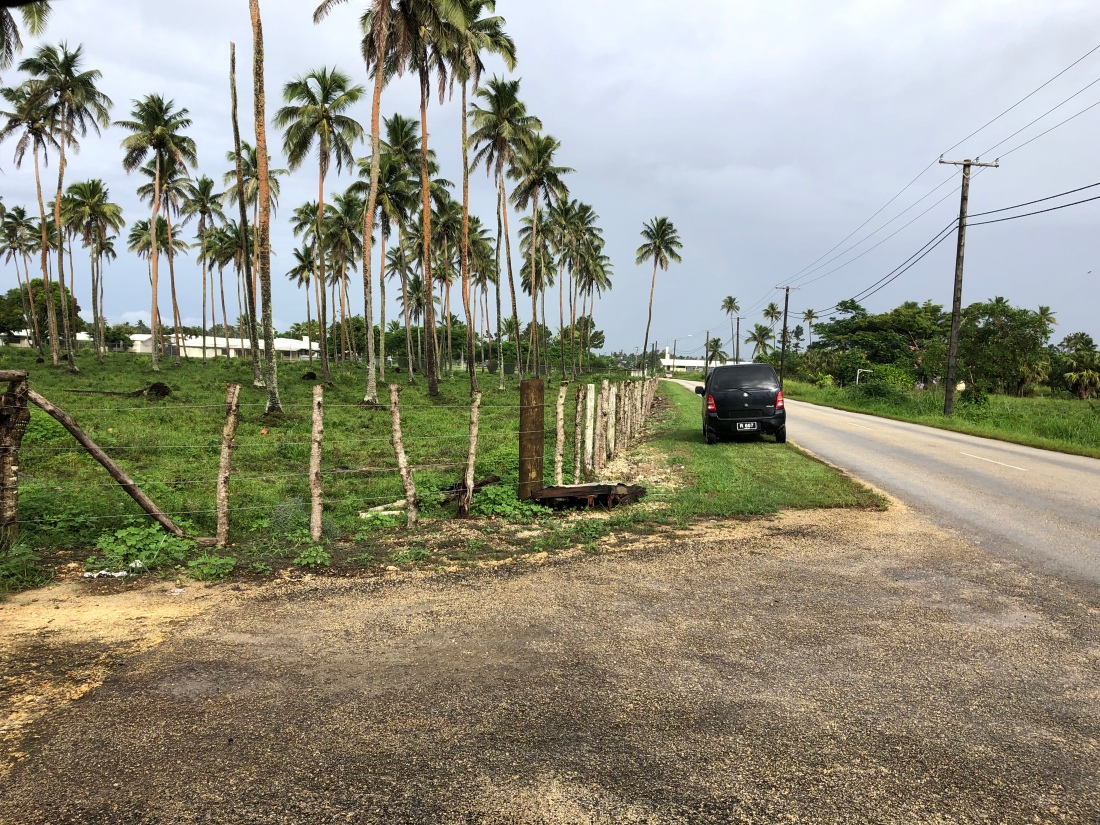 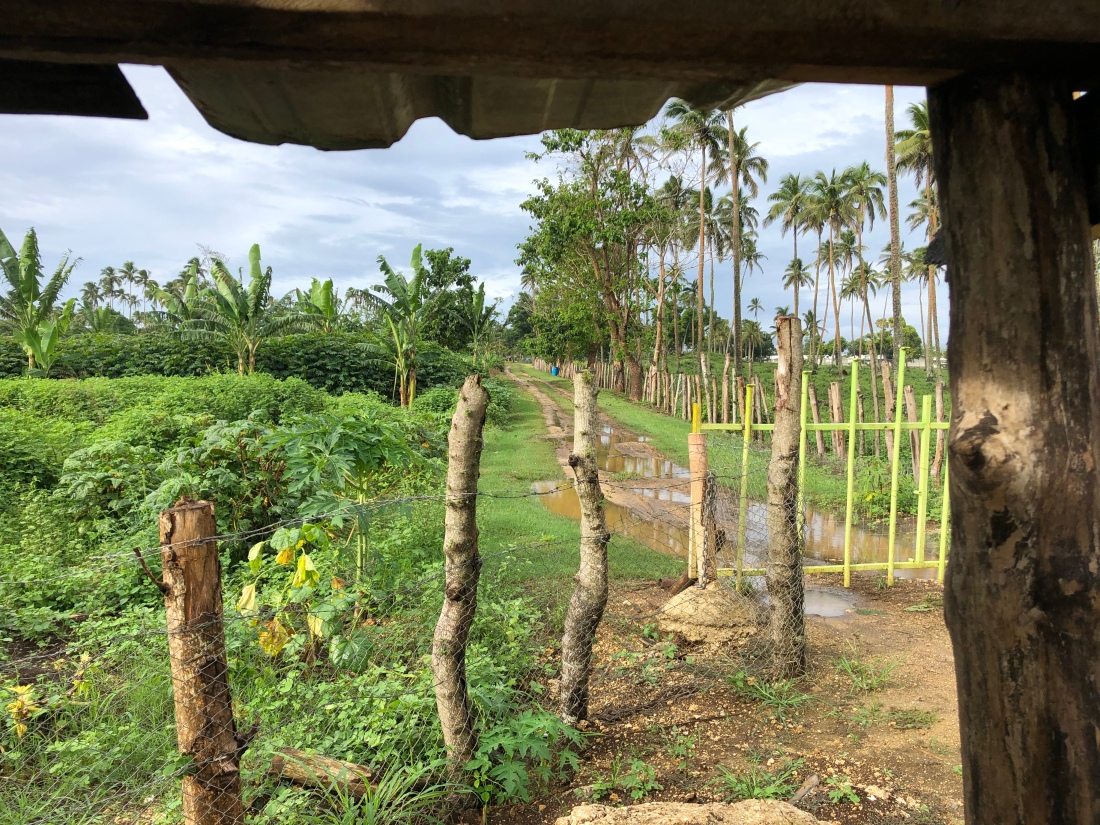 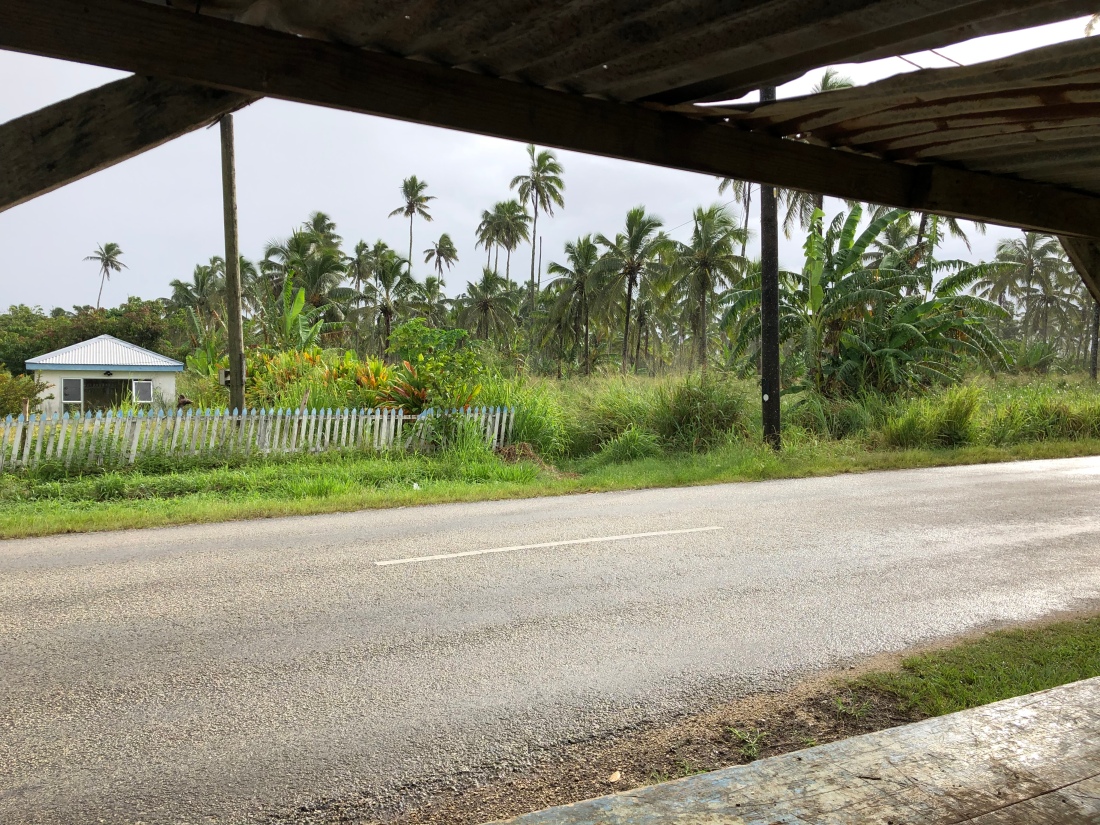 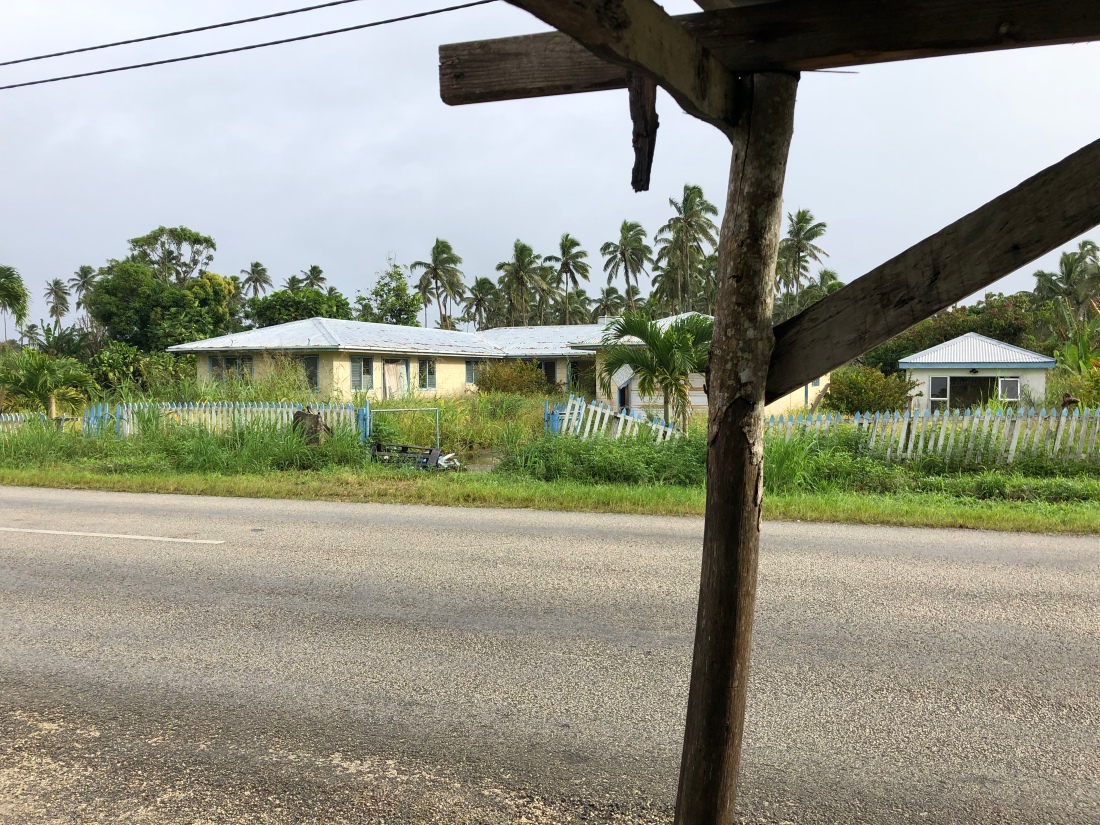 You may notice lots of bits of fingers thumbs in these pics – next time I shall bring my photographer/s (Caitlin/Sera/Kane)
Once there we kept on keeping on and finally recognised a couple of villages that were on the map that enabled us to figure out we were most definitely headed in the opposite direction to where we wanted to be.
We’ve hit a few ‘supermarkets’. They are basically warehouses of varying size and often unpowered, with stacks of stuff that you wander through hoping to find what you’re looking for. And each shop has different things so we hit a few to find our list of straws (so we can drink from the coconuts), AA batteries for the lights Dee sent Sally (for some reason she’d only brought AAA over with her) and Sprite for me – the milk in Tonga leaves a bit to be desired (Anchor UHT – slightly better than powdered but not as good as Sprite) so I’m going back to my Tahiti practice of drinking Sprite instead 😏
And now we’re home and have had VERY yummy nachos for dinner and have been curled up listening to my Radio New Zealand app about the horror in Christchurch! Blinking heck! That’s a fucked up situation. And I’m gutted.

This site uses Akismet to reduce spam. Learn how your comment data is processed.